In my last post I asked for a wish list of features for the Ogg Support. I started the integration work based on those comments and now the 1.0.5 version for n900 has been promoted to Fremantle Extras repository.

The support for Vorbis audio is good: tags work, File Manager shows them too and knows how to launch Vorbis files in Media Player, etc. Flacs are missing tags but no magic is needed for that, just a new GStreamer element. Theora support is also included. I haven’t tested it much but at least the basic features seem to work.

I’ll tell more about the details at the Maemo Summit. 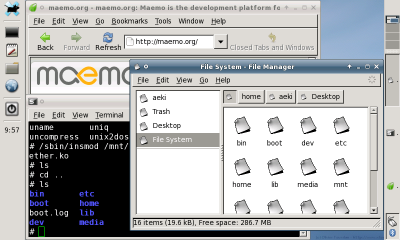 There was (again) some discussion on #maemo about gcc options regarding VFP usage so I decided to make a simple test with different gcc options using the Maemo’s cs2005q3.2-glibc2.5-arm toolchain. Nothing new here for people already familiar with the floating point stuff.

In the test I compiled a very simple test code with different -mfpu and -mfloat-abi options, -O2 and -march=armv6 were given in all cases. The asm code is linked in the table. The code is a simple for loop which could be optimized to one round but based on the results it looks like the gcc didn’t do this kind of tricks.

Although you can ask the default options from the gcc I decided to test also without the options. The test was run on n810 and results are in the table below.