I started playing with microcontrollers in 2005 and, if not at the very start, at least very quickly I decided to aim to have some sort of remote controlled Linux device with controllable camera with digital wireless communication. Now, 6 years later, I have completed my first phase :)

Couple of photos of the earlier devices are shown in the project page.

After several planning iterations and code rewrites I ended up using Qt both on the remote controlled Gumstix and on the GUI controller. I decided that trying to optimize everything from the memory and CPU consumption to the network bandwidth just isn’t worth the time spent in implementing it. The most CPU intensive task is the video encoding to H263 and that’s done in the DSP. I’m running MeeGo on the Gumstix and it provides e.g. the GStreamer plugins for the DSP.

Using Qt framework with self made simple protocol over UDP I got the Phase01 code implemented quite quickly compared to my previous efforts. The protocol allows low priority packets (like periodic statistics and video stream) to be lost and guarantees the passing of high priority packets (control commands etc.). Also only the latest control command of each type is retransmitted, i.e. an old packet is not retransmitted if a new overriding command has already been given.

The controller GUI shows the states the slave sends, like motor speeds, WLAN signal strength, CPU load average and some protocol statistics like round trip time and the number of retransmissions.

Currently the motors are controlled using the a,s,d,w keys in 10% steps and the camera is controlled dragging the mouse left button pressed on top of the video window.

I finally got the Bluetooth working with my Gumstix running 2.6.25 and my linux setup. My patches are against two weeks old kernel but hopefully apply to current HEAD too. The patches include my kernel config: gumstix-verdex-bt.config too.

I had to configure the BT hardware using pxaregs and /prog/gpio in my startup scripts (copied from some OE image):

I also had to patch my hciattach from bluez-utils 3.29. Those patches are here.

I wanted try something other than JFFS2 as the rootfs and decided to go with UBIFS. Thanks to GIT’s brilliance I had no trouble pulling the UBIFS kernel patches from their tree to mine.

It seems that the UBIFS hasn’t had many NOR flash users before me and it needed some fixes. Artem Bityutskiy was extremely helpful in fixing the deficiencies and helping me out. After a few debug rounds I now have UBIFS root on my Gumstix.

I created the UBIFS image with the following commands:

Note that I have reserved 2MiB for the kernel partition.

I had to add one extra parameter to the kernel args to specify what MTD partition I wanted to use:

Now my Gumstix boots with simplified kernel to busybox shell in roughly 4.2 seconds (counted from the bootm command in U-Boot).

I had to add a new category after all: gumstix. The embedded word has too broad a meaning.

Updating the kernel wasn’t such a big thing after all, even for a kernel n00b like me. I git cloned the vanilla tree from kernel.org and patched the generic (and one bluetooth) Gumstix patches from OE: arch-config.patch, board-init.patch, header.patch, mach-types-fix.patch, modular-init-bluetooth.patch, tsc2003-config.diff, tsc2003.c, and uImage-in-own-partition.patch. Most of them applied fine, I just had to manually apply simple Makefile patches and change pxa_init_irq call to pxa27x_init_irq.

I don’t know if it really works, but at least it booted:

It’s time to create a new category in my projects blog: embedded.

I got interested in microcontrollers some years ago and wrote something simple for 16F88 with assembler. Then I connected it to an old IPAQ using a serial connection. But the IPAQ isn’t a very good development platform so now I decided to buy a gumstix. 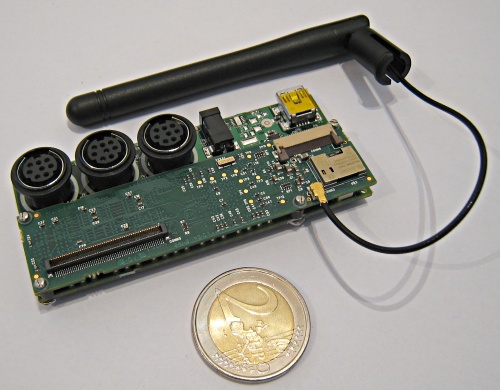 It’s 400Mhz verdex mainboard with 64M RAM and 16M flash. And a bluetooth. The mainboard is the smaller board upside down in the picture. The bigger board is a expansion board including 3x rs232, power plug, a USB mini-B connector and a bunch of GPIO lines.

The bootloader is U-Boot and the Linux distribution is based on OpenEmbedded. U-Boot is nice as I’m somewhat familiar with it but the OE I’m going to replace with something else.

I just booted it up to see how it looks inside:

Maybe the first thing would be to configure the kernel to support only those features included in my hardware setup.