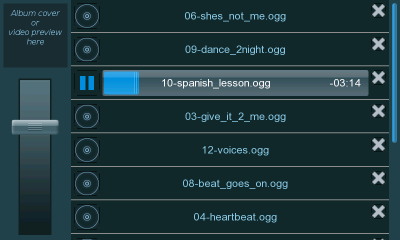 There was (again) some discussion on #maemo about gcc options regarding VFP usage so I decided to make a simple test with different gcc options using the Maemo’s cs2005q3.2-glibc2.5-arm toolchain. Nothing new here for people already familiar with the floating point stuff.

In the test I compiled a very simple test code with different -mfpu and -mfloat-abi options, -O2 and -march=armv6 were given in all cases. The asm code is linked in the table. The code is a simple for loop which could be optimized to one round but based on the results it looks like the gcc didn’t do this kind of tricks.

Although you can ask the default options from the gcc I decided to test also without the options. The test was run on n810 and results are in the table below.

Unfortunately all other issues with ogg-support still remain.

Even though the ogg-support has got nice ratings in the download page, it doesn’t work perfectly on the OS2008. Most of the issues has some sort of workaround so I decided to make a summary post of them.

Ogg-support adds Speex voice codec to the system and it seems that the VOIP client advertises it as the first choice. If both parties have it installed, it’s selected. But. The VOIP engine (or whatever) doesn’t know or just refuses to use Speex, so the VOIP stream is not actually sent, properly at least.

If you delete the Speex’ GStreamer plugin, the calls seems to work nicely.

All Oggs from Map are listed in Media Player

A workaround is mentioned in the ogg-support’s help forum. It requires editing the SQL database after the files are added to the Library.

I had to modify the mime type XML a bit to get File Manager to recognize videos and audios in Ogg container separately instead of just showing all *.ogg files as e.g. audio/x-vorbis. To be specific I had to remove the *.ogg pattern from the XML file.

It seems that the hildon_mime_open_file() in libhildonmime doesn’t launch the file without the *.ogg pattern tag in XML.

No workaround for this one.

PS. Many problems are reported in the Internet Tablet Talk’s forums. I don’t follow those frequently so please notify me in the garage’s forums about possible bugs, issues or workarounds. I do get a instant mail notification about those. Thanks.