It’s been two years already since I posted about Phase01 being completed. It was a simple track based vehicle using cheap DC motors and the hull was built from Meccano parts: 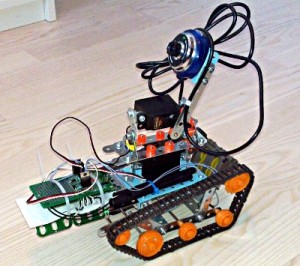 For Phase02 I decided to go with a ready made car and bought an RC Rock Crawler. It’s about four times the size of the Phase01: 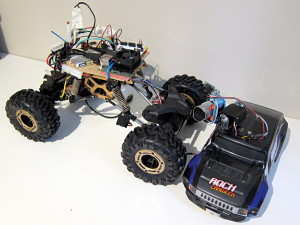 The software is roughly the same as it was for Phase01. I’ve fixed a lot of bugs, simplified some things and added a bunch of new features. The slave has a sonar next to webcam and it measures the distance to what ever the camera is pointing at. The slave also measures the current consumption and battery voltage level. All details are shown on the GUI.

The hardware on the other hand has changed a lot. Instead of handling the servos directly from Linux there’s now a separate self-designed Cortex-M4 based microcontroller board for driving the PWM signals. In the future the microcontroller can update the PWM signals real-time based on other sensors without having to worry about latency issues in Linux.

The Linux is now running on a Tegra3 based Ouya gaming device. Ouya is not as convenient for robotics as Gumstix was but personally I think Tegra has better Linux support than OMAPs. And since there is now a separate control board for motors and sensors, it’s enough for the Ouya to only have a USB connection to the control board.

Ouya needs 12 volts while the motors need 5 volts and I’m expecting to need 3.3 volts as well. So I now have three switching regulators connected to the battery for the needed voltage levels. And a USB hub because of the USB based control board and webcam. There are also lots of cables. So I’m not actually able to get everything nicely inside the car, but almost.

Controlling an RC car with a keyboard is inconvenient, so I’ve added support for gamepads. I’m currently using a Bluetooth based gamepad from Logitech: 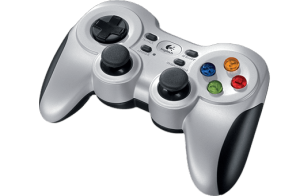 When driving in a local WiFi network, there’s no noticeable latency at all. It’s still not possible to really drive based on the camera only, the viewing angle is too narrow, turning the camera is cumbersome and the video quality needs some tweaking.

Now that I’ve made some nice progress with the project, I have clear goals for the Phase03:

So there are plenty of interesting things to learn :)

Oh, and I’ve moved the code to github.