In the Part I I described my real project with the radio: a wireless power consumption meter. But it is supposed to be a low power MCU so why not run it indefinitely with a renewable power source?

Solar power is the easiest form of renewable energy and I decided to try it out. That is of course not an option in the dark closet where the smart electricity meter is so I ended up designing a modular solar powered wireless soil moisture sensor.

Measuring the moisture of the soil is only a secondary objective. The real goal is to see if I can keep the radio running continuously throughout the Finnish winter. In December 2013 we had a total of 24 minutes of sunshine during a period of 18 days, so having solar power available should not be taken for granted.

Another issue is the temperature as common batteries must not be charged below zero degrees Celsius. I decided to go with a large solar panel from Sparkfun and 10 F super capacitors from Digikey. The panel provides a maximum of 9.15V which nicely matches four 2.7V super capacitors in series.

The voltage of solar panels decreases quickly if too much power is drawn from them. All larger solar panel systems use maximum power point tracking (MPPT) which tracks the voltage and limits the power draw if the voltage drops. I tried to find MPPT solutions for small systems but did not find anything suitable for this project. Adafruit’s Solar Lithium Ion/Polymer charger is based on MCP73871 but that seems to be designed for batteries alone. There is also bq25570 from TI which looks otherwise very well suited for this kind of project but it seems to be designed for even smaller solar panels.

The final software will make the measurements once an hour and sleep the rest of the time in the deepest sleep mode. The power consumption in the sleep is only a few micro-amps for the whole thing.

I made some initial tests with a five minute interval behind glass windows and without direct sunshine. During the last day I tried to keep the panel pointed directly to the sun, when possible and that clearly shows in the graph below.

For now I have just printed out the values and created a graph about the measurements. For the electricity measurements I was using Sparkfun’s Phant on my own server but that seemed to lack features and stability. Currently I am testing ThingSpeak and letting them handle the hosting. It is open source so I could move it to my own server as well. So far the ThingSpeak looks good.

Based on the test with shorter measurement interval, I am hopeful about the radio being able to run through the long and dark winter in Finland.

Electricity is expensive and being low power is environmentally friendly. And what is more motivating than seeing the total power consumption in real time? There are plenty of commercial products out there already but will they give you the raw data so that you can plot nice graphics? Not that many. And of course self made is always .. self made.

Lately in Finland the old electricity meters have been replaced with smart meters and they seem to have leds showing the power consumption. The model I have has a led that blinks once for every consumed watt-hour so it is easy and safe to calculate the power consumption by counting the blinks.

I am using a self designed CC430 based 433Mhz radio board and a simple photo resistor to count the blinks of the led in the apartment’s smart meter. Every minute it sends the count to another radio hooked into a Raspberry Pi that in turn sends the value to a server in the network. Then I have a simple javascript based web page that shows the data with a minute or two latency.

There is no power plug that I could use for the radio board so it is running on two AA batteries. I put everything in a small plastic box. Below is an image of the box before I placed it next to the smart meter. 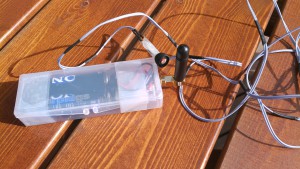 The radio part of the CC430 is turned completely off when not sending and the MCU part is sleeping. The only part running is the comparator that compares the photo resistor’s output to a predefined thresholds. If the threshold is exceeded an interrupt fires and I count the interrupts. Once a minute I reset the counter, turn on the radio and send the count over the air. Running the comparator takes some 200uA and I think I might be able to just bluntly interpret the photo resistor’s output as GPIO. That should drop the consumption below 10uA. Even with the higher consumption it has been running well for a few months now as can be seen in the graph below.

Having to replace batteries is inconvenient and another project of mine will be running outside so I can use a solar panel. More on that in Part II.